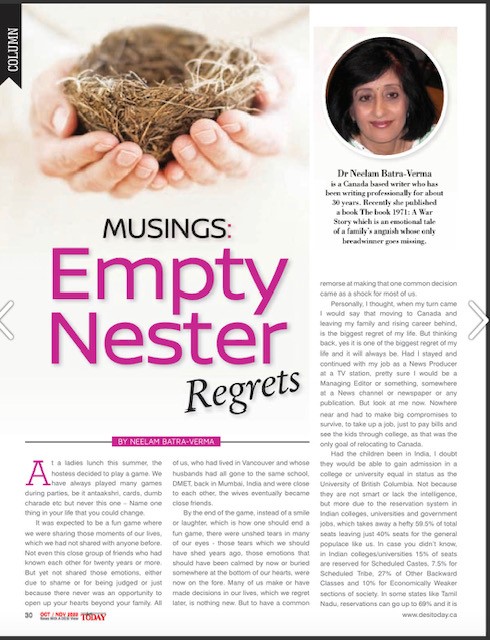 At a ladies lunch this summer, the hostess decided to play a game. We have always played many games during parties, be it antaakshri, cards, dumb charade etc but never this one – Name one thing in your life that you could change.

It was expected to be a fun game where we were sharing those moments of our lives, which we had not shared with anyone before. Not even this close group of friends who had known each other for twenty years or more. But yet not shared those emotions, either due to shame or for being judged or just because there never was an opportunity to open up your hearts beyond your family. All of us, who had lived in Vancouver and whose husbands had all gone to the same school, DMET, back in Mumbai, India and were close to each other, the wives eventually became close friends.

By the end of the game, instead of a smile or laughter, which is how one should end a fun game, there were unshed tears in many of our eyes – those tears which we should have shed years ago, those emotions that should have been calmed by now or buried somewhere at the bottom of our hearts, were now on the fore. Many of us make or have made decisions in our lives, which we regret later, is nothing new. But to have a common remorse at making that one common decision came as a shock for most of us.

Personally, I thought, when my turn came I would say that moving to Canada and leaving my family and rising career behind, is the biggest regret of my life. But thinking back, yes it is one of the biggest regret of my life and it will always be. Had I stayed and continued with my job as a News Producer at a TV station, pretty sure I would be a Managing Editor or something, somewhere at a News channel or newspaper or any publication. But look at me now. Nowhere near and had to make big compromises to survive, to take up a job, just to pay bills and see the kids through college, as that was the only goal of relocating to Canada.

Had the children been in India, I doubt they would be able to gain admission in a college or university equal in status as the University of British Columbia. Not because they are not smart or lack the intelligence, but more due to the ugly reservation system in Indian colleges, universities and government jobs, which takes away a hefty 59.5% of total seats leaving just 40% seats for the general populace like us. In case you didn’t know, in Indian colleges/universities 15% of seats are reserved for Scheduled Castes, 7.5% for Scheduled Tribe, 27% of Other Backward Classes and 10% for Economically Weaker sections of society. In some states like Tamil Nadu, reservations can go up to 69% and it is as high as 80% in Arunachal Pradesh, which can only be termed atrocious. As of now, there is another group of society in India, which is fighting to take over a portion of the leftover pie from the general population.

The reservation system was a gift to India from the British Monarchy who first introduced some elements of it in the Government of India Act in 1909 and what the British did to India and in India, can be nothing good to talk about. Divide and Rule was their policy and…. oops! the Queen just died and I should hold my tongue.

However, thanks to BR Ambedkarji, the ugly reservation plan continued after Independence, which was supposed to be for ten years only. Ironically, thanks to our politicians, it keeps getting renewed with a number of Amendments, the latest being the 104th Amendment which will continue up to 2030. And if you think any elected Prime Minister or politician will ever get rid of it, you are honestly mistaken – not sadly. The reserved class represents a big chunk of their votes, which no political party dare risk.

Don’t get me wrong. I totally understand that weaker sections of society should be given an opportunity in life too and some kind of quota should be given to that section of society. But there should be a line drawn somewhere, like if a father had taken advantage of the quota system to get a job or a seat in a prestigious college, none of his kids or grandkids should be allowed to use the quota again. For ensuring that his family does not fall through the cracks and go back to being weak again, would be his responsibility and so on. Buck has to stop somewhere but unfortunately, it just continues. 75 years after independence, quota continues and there is no end in sight. No wonder, you see Indian students taking out huge loans and moving off shores for higher education. Once there, do they ever go back to India? You know the answer and I shall not elaborate here. This is a brain drain, which no politician will ever talk about.  I was a victim of this system, as I had to change the path of my career, due to the endless quota regime, when I could not get into my choice of career and did not want my children to go through this.

Sorry, my emotions got the best of me. No, reservation was not the name of the game we were playing. To remind you again, we were supposed to talk about one thing in our lives which we sort of regret.  It was nice to hear many of us opening up their hearts and talking about their various feelings – some regretted at not being able to bring their parents to Canada, for others it was a regret for chopping off their hair when it was as long during their younger days while for others, it was just getting married etc.

It was shocking to hear that many of us had to terminate at least one pregnancy each, almost around the same time as we had moved to Canada, no matter when, how and where from the move had taken place. Relocating to Canada had been a big shock for most of us, especially after the kind of lives we had been leading back in India or Dubai or Kuwait or whatever.

All of us had already moved with at least two little kids in tow and without a nanny or a cook or cleaner at home and getting household chores done in between running to grocery stores, cooking, activities for children, dropping and picking the children up from school etc was taking a toll. Living a life without family or nanny support was anyway difficult for most of us and to take responsibility of another baby was a dreadful thought. If any one of us had been in India in that situation, would we have let that decision take the better of us? I doubt it.

I had heard stories of how many women had regretted their decision of terminating a pregnancy for whatever reason, but never given it a thought and had mostly scoffed it of as a temporary phase. But that day, when I had dropped my youngest child to university and had come back to an empty house devoid of activity, my mind had wondered back to the time, when I had taken that decision. Only if I had continued with that pregnancy, I still would have something to look forward to – another goal in the net, another game, another graduation, another milestone or another wedding. The silence of the empty house was screeching and bone chilling. No voice to ask what’s for lunch, what’s for dinner, I am hungry or the regular thumping of the soccer ball on the driveway, which my ears were so used to hearing, now were rendered to silence. My ears yearned to hear those voices again. Instead all I heard was the ringing of my own ears and the even the chirping of the birds in my backyard, which I had always enjoyed listening to, were no more music to my ears.

For years I had yearned for this day when I would be free of all responsibilities and the kids would be on their own. So now that I have it, why do I have regrets? Regrets are only for the dying. I am not dying – not yet. In fact, now is the time I am going to live my life – party hard, vacation hard, go back to the hobbies I had left behind when I had my first born and enjoy time with my friends. A regret or a common regret, will not hold me or my friends back for living our lives, zestfully. No, we haven’t crossed the finish line yet. We have miles to go before we sleep, miles to go before we sleep.

This article was published in the October 2022 edition of Desi Today Magazine, Vancouver.