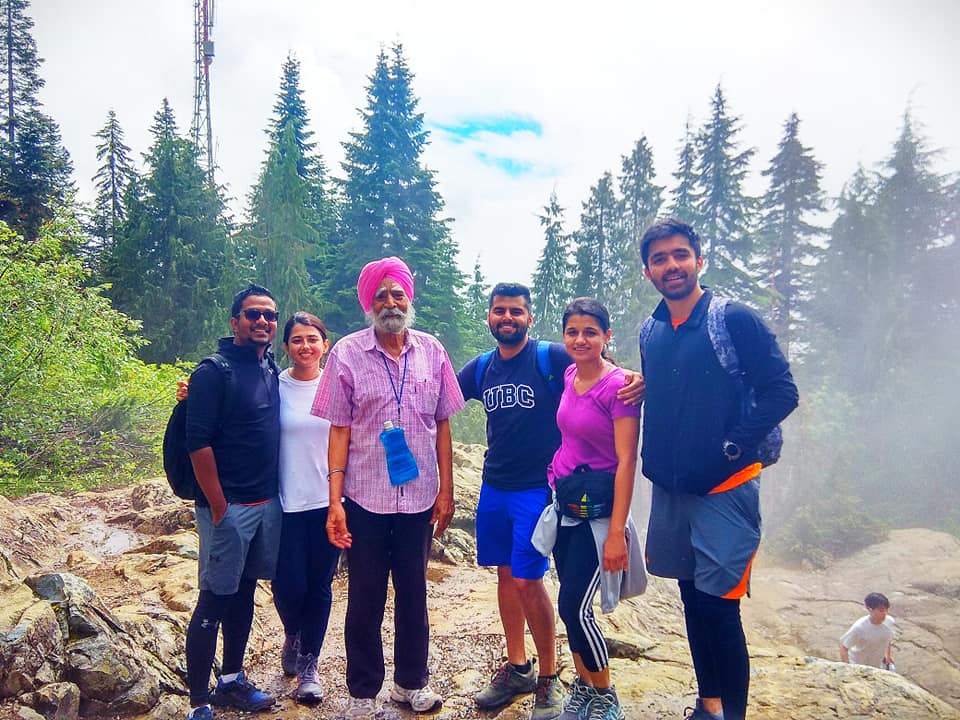 What can be more amazing than to receive an appreciation letter from the Premier of British Columbia, John Horgan on a life not only well-lived but also highly inspirational, passionate and motivational.

“You have proven yourself to be an inspiration to not only your community but to all British Columbians,” affirmed Horgan’s letter to Gian Singh Kotli, a Punjabi scholar, a teacher, a lawyer, a hockey player, a writer, a poet, a hiker, a literateur, a snowshoer and many other hats that he wears with pride.

Of late, Gian Singh Kotli has been making waves in Canada for his fitness and his candid encouragement and inspiration to all. Local media has been following his story for months now and now even follow him on his hikes with big cameras in tow. By the time of writing, Kotli had climbed the majestic and popular Grouse Mountain at least 200 times and had walked the famous Stanley Park at least 40 times. Grouse Mountain opened on 23rd May and he has already hiked 25 times.

Grouse Mountain, located in the North Shore Mountains of Vancouver, in British Columbia has an elevation of 1200m at its peak and is a very popular destination for hikers in the summer. Climbing that mountain is not easy and that is why the climb is called the Grouse grind. More than 150,000 hikers hike the mountain in the summer every year. In the summer, the mountain Resort runs chairlifts, serving at least 33 runs every day and is an attraction for tourists around the world. Talking to this reporter, Kotli laughed when told that a person like me has only visited the Grouse Mountain on the chair lift. “What is the point of going to the mountain on a chairlift? You are missing the beauty and elegance of this natural wonder. You need to climb the 2830 steps to get the feel of it. It is a serious workout and a basic level of fitness is required. It is better than going to a gym. You will easily reach your cardio training goal as well as enough squats and lunges for the week. But certainly, your legs and the skeletal system have to be strong enough to bear the brunt of those steps.”

Gian Singh Kotli, from Hoshiarpur village in Punjab, started his career as a humble teacher in Khalsa high school in Kolkata. He then went on to further his studies by enrolling in BA and then a Masters degree in not one but two subjects – Political Science and English. His thirst for education once again led him to go back to University to do his Bachelor of Education followed by a law degree. He is also called Gyani (the learned one) since he also has an Honors degree Punjabi and also is a Certified Translator in English & Punjabi by STIBC, Vancouver.

Not only his education but also Kotli’s career took him to faraway places, working different positions and gaining new experiences. He started his career teaching English at the Khalsa School in Kolkatta, then moved to Patna, to take up the principal position in a high school and then was picked up, by the then Barnala government in Punjab to become Punjab Legislative Assembly public relations officer in the early 80s. His love for Kolkatta was, however, overpowering and he went to join the Rozana desh darpan, one of the biggest daily Punjabi newspapers outside Punjab. Says Kotli in a candid interview, “Not many know that Kolkatta has a huge Punjabi population and they want to keep the language alive. During the 80s, it had a massive circulation and was one of the most sought after publications.”

But his love for Kolkatta, kept bringing him back. He spent three decades, there while deep in various educational, literary, and sports activities. He was popularly known as teacher, Principal, press reporter, Press photographer, Editor, Advocate, player, etc. Says he proudly, “The Punjabi community of Kolkata gave me immense respect. When I joined Khalsa Sporting Club, a Hockey team, which was playing in the 3rd Division of BHA (Bengal Hockey league Association), I won maximum matches, moving on to the 2nd Division and eventually the first. In Punjab, I played Football, Kabaddi and enjoyed all types of races, jumps, etc”.

Kotli goes on to narrate another story about “Punjab Sports Club” team which once was top ranking 1st Division Hockey team of Kolkatta, who had moved down to 3rd Division. “Pirthwi Raj Kapoor, the legendary film actor was one of its founders and played in this team. Eventually, I was made the and then the manager of the team.”

Kotli has worn multiple hats during 87 years of his life. Apart from being a teacher, he is also a Punjabi scholar, a literateur and a poet. He has been spreading the teachings of Guru Nanak Devji and propagating Sikhism through his enlightened knowledge around the world. He was invited to Singapore as a Sikh scholar and educationist there to talk about the teachings to the youth, who many have not been exposed to when living in a foreign country. Says he, “Getting a visa or a Permanent Resident Status in Singapore certainly is not a cakewalk. But the community there cleared all the hurdles for me so I could work there with ease.”

Then, he was in high demand. The more people hear about his teachings, they become a fan of the simple ways he spreads the message. A friend invited him to Canada through Khalsa Diwan Society in Vancouver in 1990 and ensured that he had all documents to start a new chapter in his life.

He joined as a teacher in the BC based Khalsa Secondary School and was spreading his teachings in different gurdwaras in the province. He was soon appointed as the Multi-faith Coordinator in Surrey Memorial Hospital in BC, a position he still holds.

His messages of love, equality, and well-being of the human race has spread everywhere. He is called to spread his teachings to faraway places like the North West Territories, Ontario, Alberta, Yuko, Yellowknife. “I was asked to speak at World religious conference even as far as Yellowknife and even in unheard-of places like Tuktoyaktuk.”

Tuktovaktuk is located in the Northwest Territories of Canada, in the northern region and is one of the six Inuvialuit communities in the Arctic Circle on the shores of Artic Ocean and is the only community in Canada on the Arctic Ocean which is connected to the rest of Canada by road with a less than a thousand population.

Coming back to his passion for hiking, not only the Grouse Mountain, Kotli has also all of the famous Stanley Park in Vancouver 38 times. Surprisingly, he doesn’t even consider it a workout. “Stanley Park is nothing. I can’t walk the whole Park twice in one day. Takes just 3-4 hours.” He has also snowshoed at Thunderbird Mountain, which is higher than the Grouse Mountain.

For the reader’s knowledge, Stanley is spread across 1001 acre, situated in Vancouver’s downtown Peninsula and surrounded by the beautiful English Bay and Burrard Inlet. Unlike most other parks, Stanley Park was never architecturally designed but is an evolution of a forest within the urban space over many years. At least 8 million tourists visit this marvelous natural wonder every year, not including the pandemic era. Presently, the park is roamed by coyotes and other animals and has posed danger to the walking public. But nothing can deter Kotli. “I keep waiting for those animals to come to pay me a visit, but guess they are afraid of me. I still have to encounter one,” he laughed.

Kotli is now famous on the hikes for not only for his fitness level, but also for encouraging other tired hikers who decide to give up mid-way. “I give a pep talk to anyone who is tired and thinks they cannot reach the top. Everyone can hike. Nevertheless, my famous line is if I can do it at my age, you can too as most are younger than me. I have yet to come across a hiker my age. The youngsters get inspired and want to take pictures with me. Of course, I oblige,” Kotli laughs heartily.

Behind every successful man is a woman. Kotli’s wife Surender Kaur, has been his anchor and happily shifted places and her own career, for her husband’s sake. Married for almost 50 years, Surender Kaur too has worked hard in her life, adjusting to new workplaces, environment and culture. With a double Master’s degree, she too has taught in schools along with raising three daughters. “I have written four books of poems in Punjabi and in many of them, she is my inspiration. I have one poem STREE totally dedicated to my wife. I cannot imagine my life without her.”

Premier John Horgan rightly said in his letter, “In addition to your illustrious contributions to Punjabi scholarship, literature and poetry, you have climbed Grouse Mountain nearly 200 times. This is impressive for anyone, but to be doing so at the age of 87, outpacing people half your age (and younger), is truly remarkable. You are proof that through hard work, perseverance, and an indomitable spirit, anything is possible.”

With high spirits and a zest for motivating and inspiring all and sundry, Kotli hikes on. Nothing can dampen his spirits; not even Covid or lockdowns. Gone are the days when Hollywood or Bollywood stars were considered heroes. It is people like Gian Singh Kotli who are the real heroes; who inspire and teach people to live a humane life for the betterment of the human race. Way to go Gian Singh Kotli.