The Winners and Losers of 1971 India-Pak war 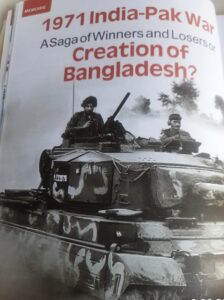 Rightly said, no wars are honorable and no wars are just and all wars are avoidable and can be won with words and language. All of this makes for a feel good quote but in a world filled with politics and diplomacy and yearn for power, words are merely so.

At a time when Russia is invading Ukraine, China is preparing to take over Taiwan and Iran is flexing its muscles, the war of words is long over. It’s all about logistics and manpower and about losing and winning. Mere logistics cannot win wars and mere soldiers cannot win battles. Everything goes hand in hand. There can be no win without a loser and while the winners rejoice on their victory, the loser sulks and waits for its next opportunity. But losses cannot be defined and therefore can be physical, emotional and even suffering of existence. Dead or alive? Existing or extinct?

The 1971 India-Pak war resulted in the creation of Bangladesh. There was joy all over and there should be. For millions of Bengalis who have suffered at the hands of the Pakistani Army for decades, the creation of Bangladesh was the culmination of years of suffering of Bengalis living in East Pakistan. Going back to history, it was in 1970 when the Awami League captured 160 of the 162 seats in the general elections while Zullfikar Ali Bhutto’s Pakistan Peoples Party won a majority in West Pakistan. The then President of Pakistan, General Yahya Khan, organized a meeting between Awami League leader Sheikh Mujibur Reham and Bhutto to come to a consensus to form the future constitution. That was not to be as Mujib insisted his six points were not agreeable to Bhutto.

Unrest broke out as Awami League insisted on autonomy and independence and all negotiations between the parties failed. As a result, Pakistani Army was deployed in East Pakistan in March of 1971 and so started the torture of the Bengalis. Hindu Minority Bengalis and supporters of the liberation movement were targeted. Some American diplomats even called the atrocities as “selective genocide” and condemned the genocide, yet continued to transfer weapons to the Pakistani Army.

The death toll started mounting in a few hundred to thousands, up to 3 million by some estimates. Rape of women and torture of kids were the weapons of war. By rough estimates, at least 200,000 women were sexually assaulted. Even children were not spared. Millions of refugees have started pouring into India across borders as the leaders called for freedom and independence from Pakistan. By the fall of 1971, as many as 15 million people had crossed over to India looking for refuge from the atrocities committed by the Pakistani Army. That was when the then Prime Minister of India, Indira Gandhi, decided to intervene.

Though the war lasted just two weeks as Pakistan decided to surrender, it left behind a trail of destruction and a lifetime of grievance without closure, for some. As many as 4000 Indian soldiers are said to have perished while more than 10,000 were injured. Many soldiers were taken Prisoners of War on both sides of the border. India has taken as many as 92,000 Prisoners of War and with the aim of keeping Mujibur Rehman safe and obtaining his release from Pakistani jail, Indira Gandhi released all the prisoners, which was the deal as per Shimla Agreement signed on August 2, 1972. Pakistan too was supposed to release Indian Prisoners of War in exchange, but it did not release all of them.

This is another story about Indira Gandhi getting a lot of flake from the opposition leaders for releasing the Pakistani prisoners without using them as a bargaining tool in exchange for Kashmir. Unfortunately, that diplomatic decision to release the prisoners without making any deal for Kashmir, has the country bleeding till today. Mujibur Rahman, whom Indira Gandhi called her brother, for whom she reportedly did not bring up the Kashmir issue, was also assassinated three years later by the Pakistani Army, which had been seething since the creation of Bangladesh.

As many as 54 Indian Prisoners of War were left to rot in Pakistani jails, whose existence Pakistan continues to deny today. It was while working on an article years ago that my research led me to meet the families of missing defense personnel who had gone to the 1971 India-Pak war, but never came back. Despite consistent pleas by the families and evidence that their loved ones were languishing in Pakistani jails and needed to be brought home, both the Indian and Pakistani governments turned a deaf ear.

While working on a series of articles on the issue, I met Col Mattu in Mayur Vihar, Delhi, who had formed an association to trace missing defense personnel from the 1971 war and had taken upon the task of keeping the families of the missing Prisoners of War informed of his attempts to contact government officials and lobby for their release. He had collected addresses of families of missing defense personnel and kept them updated on the bits and pieces of news percolating through either the news media or those who were imprisoned on minor charges at the border and then being released. Many had come back with notes from armed men in Pakistani jails and the torture they were going through, pleading with the Indian government to get them released.

I got the opportunity to follow these families for a couple of years and met many Ministers and officials, trying to seek help from them to bring the unfortunate 54 home. Col Mattu, however, was very active and wrote letters to government officials, met politicians and did what he could to bring the Government’s attention to the plight of the families. He showed me letters, which he had received from some of the POWs, who were able to sneak them out through sympathizers or those who were in jail for a short time, while in Pakistan pleading to come home. He was very confident that his efforts would bring results. He told me, “I am sure if we all speak in one voice, we can be heard.” He brought the families of missing defense personnel under one umbrella and kept them informed of his efforts and the results they had achieved.

In 1981, with the help of the Red Cross, Pakistan allowed the International Red Cross team to help trace the missing defense personnel but they couldn’t find any evidence. Then again in 1989, at the constant hammering by our group, a fresh search was launched to trace our people. “We do believe the soldiers are still there, but Pakistan is hiding them in other jails which are not accessible.”

After all, if you tell a thief that the police are coming, will they leave evidence?” Col. Mattu opined. “For some of the soldiers, we even got evidence over the years about them being alive. For example, Major Ashok Suri’s father had evidence that he had been shifted from Karachi to NWEP and then to somewhere in Malakand. Mukhtiar Singh, who was repatriated from Pakistan sometime in 1988, also said that Major Ashok Puri was in Kot Lakhpat jail at the time. Another of our brave soldiers, Flight Lieutenant Lamba, appeared as one of the five Indian pilots captured alive on Pakistan Radio, but we couldn’t find any trace of him either. He was last seen in 1988 at the Lahore Interrogation Centre.”

Then, just a couple of days before I moved to Canada in 2002, a gentleman who said he was in Pakistan jail for years and was released recently, had come to meet me. He said he was a spy for India, but when he was caught, the government of India disowned him and he was very angry. He wanted me to write his story, but because I was in the middle of a big relocation in my life, I could not take the time to do so. And eventually, I even lost all his contact information. However, all these years, I could not help but feel guilty for not being able to write his story. The remorse I felt for years had kept me awake all night and I had to resort to taking sleeping pills to fall asleep for years till I finished my book.

Also, after moving to Canada, I felt the pain of missing family first hand as I had left my parents, brother and sister behind. I missed our little chats, our little fights and even missed enjoying that hot ginger morning tea with my dad and mom. I felt the emptiness in me. It was surreal and it was then I resolved to put the story of the missing 54 on record, albeit in fictionalized form, and gave birth to 1971: A War Story. I dedicate this story to all forgotten Bravehearts and their families. Their legends will never die!

We all know that wars are not easy on anyone, be it on a country or its people. The toll it takes on humans is not only physical, but also psychological while in a country, it will be economic. In an article published in 2006 in the National Library of Medicine, “War has a catastrophic effect on the health and well being of nations. Studies have shown that conflict situations cause more mortality and disability than any major disease. War destroys communities and families and often disrupts the development of the social and economic fabric of nations. The effects of war include long-term physical and psychological harm to children and adults, as well as reduction in material and human capital. Death as a result of wars is simply the “tip of the iceberg”. Other consequences, besides death, are not well documented. They include endemic poverty, malnutrition, disability, economic/ social decline and psychosocial illness, to mention only a few. Only through a greater understanding of conflicts and the myriad of mental health problems that arise from them, coherent and effective strategies for dealing with such problems can be developed.”

Every battle that is won, there are losers, which may be the country which had to cede a few inches of its land or people who lose not only their life and property but also their psychological health. For those families who had the privilege of performing the last rites of their loved ones, who went to war in uniforms, but came back in coffins, though sad, yet feel proud that their loved one died serving their country. However, for those, whose loved ones never came back but they heard stories that are still alive yet not reachable is agonizing and unendurable. There is no victory without a loss and there is no battle that does not leave a lifetime of scars, suffering and trauma. “The only victories which leave no regret are those which are gained over ignorance,” said Napoleon Bonaparte.